Person will receive a printout of the test with visual depiction of the overall state of health and imbalances displayed clearly on the graphs.

A: Heart Rate Variability (HRV) Test  measures the levels of vital energy, rate of biological aging and ability to adapt  and process stress .

These are the fundamental questions of life and death. Man is alive only as long as he has a vital energy. And he is healthy only as long as his interaction with the environment is harmonious and balanced. If the balance is broken than illness begins. Vital energy is ended — death comes.

Q: What do you mean by “vital energy”. Here we do not refer to energy measured in joules, kilowatt-hours or TNT. Then what are we talking about?

A: Here, the ‘vital energy’ is measured by HRV and pulse diagnosis.

The point here is the following. The source of the vital energy are primarily from sunlight, air-oxygen and nutrients derived from food as well as electrons from the earth. All organs and systems of a body receive and distributes this energetic nourishment through blood.

A heart sets the rhythm to the process of blood moving and supplying a body with energy.

We know that the heart rate is variable. Thus a body is adapted to the external environment. Even when a patient lies on a couch during the survey and does nothing, however, there is a complicated process of interaction with the environment. Scientifically speaking — ADAPTATION. This process of adaptation is accompanied by a continuous change in the heart rhythm.

In the course of the survey/test we can roughly estimate how much the heart rate is variable. During the five-minute test we look at the changing numbers on the ECG signal, where the program displays the duration of the cardiac cycle, in milliseconds, and recounts how the heart rate (HR) changes.

If the heart rate is almost unchangable then it means that the body is out of balance. And if the heart rate is changable this means that the process of the blood supply, and therefore the energy is regulated. So, let’s remember the simple truth. The higher heart rate variability, the greater potential reserves of the body to adapt. Of course, everything has reasonable limits. Excessive variability in no way should be regarded as a large energy potential, it’s more like to shoot out of a cannon on sparrows. Total chaos reigns in the systems of regulation — respectively, the energy is spent foolishly.

Q: How much time it takes?

A: Testing and evaluation time may take between 30 min to 1 h, all depending up on the complexity of the case and type of tests included.

Q: Are there special recommendations regarding my preparation for the test?

A: For the accuracy of the measurements, tests should preferably be conducted in the morning time, 3 hours after last meal, when the body is rested and not under stress. Thus preferably, a tested person should not eat anything or drink tea or coffee for 3 hours prior to the test. All medication used for cardiovascular problems should be abstained from for at least 12 hours prior to the test.

Q: What will I get from the visit?

A: Person will receive a printout of the test with visual depiction of the overall state of health, imbalances and rate of biological aging displayed clearly on the graphs. 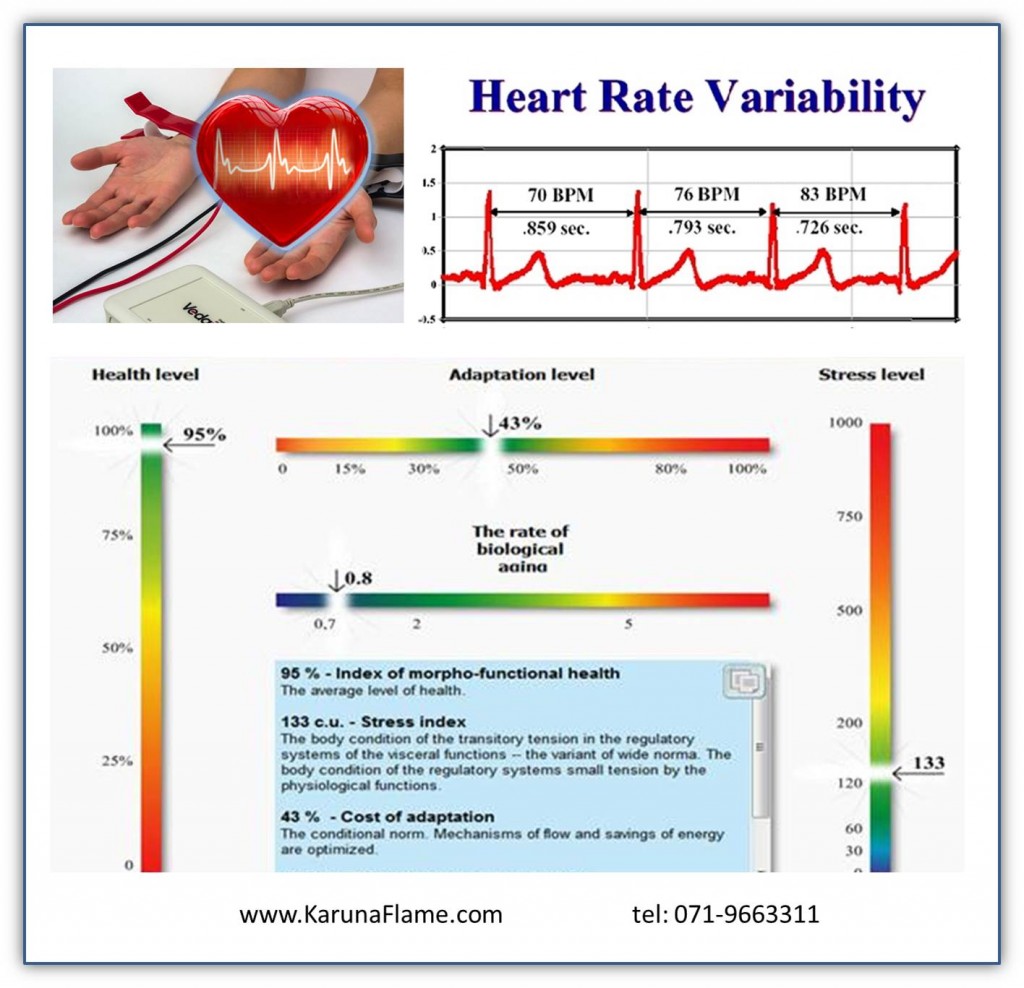 Meridians are called energy channels through which vital energy circulates between the “organs”. The term “organ” means the concept much wider than a physiological organ of the same name. Let us discuss this in more details, for this we turn to the book, which has become canonical for specialists of Oriental medicine — V. G. Vogralik “Fundamentals of Chinese medical method Zhen-chiu”:

“According to the doctrine of traditional Chinese medicine , the human body has 5 main, and with them 12 significant “organs”, ie, the structural and functional units combined in the concept of “organ” not so much because they’re morphologically delineated and topographically bounded (as it is customary in our school of medicine), but because of common functional activity. This should be well understood”.

So, when saying “organ” we mean “functional system”.

The term “functional system” was introduced by Russian physiologist P. K. Anokhin. He realized that the traditional anatomical approach did not allow to explain the ability of organisms to maintain homeostasis, interact with the environment and adapt to it. Therefore he has proposed to shift the attention focus from the individual organs to the physiological functions. And has described the unified principles of structure of various functional systems.

Only perceiving organs adopted in traditional Oriental medicine like some prototypes of the modern functional systems we can realize all sagacity of ancient healers and the value of their systematic approach.

“The “heart” — the entire cardiovascular system with its function of blood circulation, closely related with mental human activity;
The “spleen” — the entire digestive system, which implements the function of meal intake and processing, absorption and using by the body, utilization of produced toxins;
The “kidneys” — the system of urine formation, total water-salt metabolism and excretion of the organism liquid waste, the entire humoral regulation (the endocrine glands);
The “lungs” — the entire respiratory system, which includes the skin;
The “liver” — with its most dynamic metabolic activity, central and autonomic nervous regulation of this activity and impact on the other organs”.

Please note that in some cases there are very significant distinctions in the interpretation of organ functions in traditional Chinese medicine from the ideas, adopted in modern medicine. In particular, the “spleen” in traditional Chinese medicine is in charge of the entire digestive system, that is in care of the spleen, among the other organs of the digestive system are: the stomach, the small intestine, the colon, the liver, the gallbladder and the pancreas — the physiological organs which have given their names to the “organs” in traditional Chinese medicine. While the role of the spleen as a physiological organ is much more modest — fine purification of blood, removing of outdated blood cells and platelets, plus hemoglobin recycling. 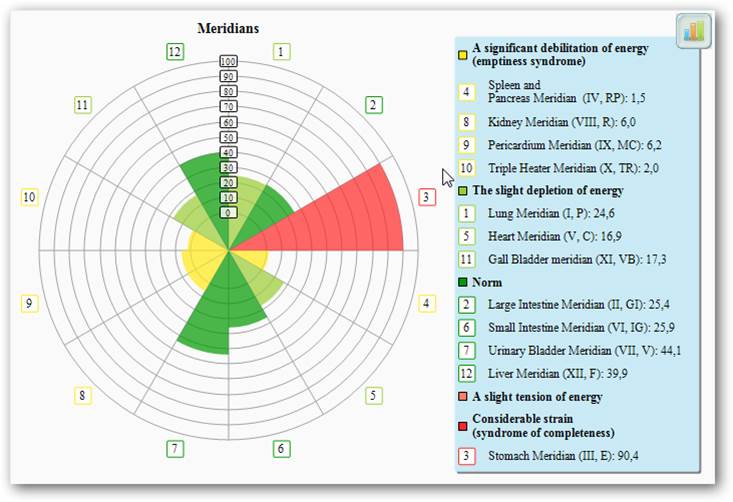 quote from the textbook of V. G. Vogralik:

“Since ancient times, Chinese doctors began to notice that when punctures in the specific points of the body, patients felt the special sensations like a current, heaviness, deep ache, flow of the “vital energy” in a certain direction, and in the future the strengthening of functions of certain organs. Irritation of some groups of points causes the motion of “energy” in one direction, the other — in the other. These paths of the “energy” motion from the periphery inward upon irritation of the corresponding points, however, in many cases, have also turned out the pathways of spreading (irradiation) of pain from inside to the periphery when the lesions of the relevant organs. In other words, the ways of connection of the body integuments with the internal organs are emerged. It was suggested that these “channels” are like the paths of “energy” movement, which interconnects the body integuments with the internal organs, and that by the impact on them, for example by Zhen-jeou method it’s possible to affect the “energy”, its movement and to change in right direction the functional state of the organs and organism as a whole”.

It’s very important to understand what kind of energy we’re talking about.

“The Chinese doctrine” of “vital energy ” — “Qi” . The functional state in which at any given moment there is a person and which is like the resultant of all life processes in him, we call vitality. We say that one man has good vitality, he is full of energy, energy boils in him, the other differs by weakened vitality, prostration, loss of energy; the first, so to speak, is full of “vitality”, the second is lacking it. We are talking about the muscle, nerve and another tones, the power and energy of muscle contraction, the heart activity, the liver, kidneys, nervous system, etc. All of this is based on a certain direction and tension of metabolism in organs and organism as a whole. This notion of viability, vitality, vital energy or life force the Chinese doctors had already expressed many thousands of years ago by the word “Qi” (in Japanese — “Qi”, in Sanskrit – “Prana”).
“Qi” in our understanding is an integral function of the entire activity of the organism, its energy, tone and vitality. Every organ, every system of organs has its own “Qi” as the expression of exchange and function at any given moment. The resultant of all these “Qi” is “Qi” of the organism.
G. Bachmann says: “Energy is outside matter and only available to theological analysis”. We must emphasize that the Chinese themselves do not share this view, and by the concept of “vital energy” (Qi) they express the noticed objective reality and objective necessity of the living organisms existence. We, of course, fully share this view. Recently the problem of bioenergy is broadly set by A. Szent-Gyorgyi, the Nobel Prize winner in 1937 for his works in biochemistry (A. Szent-Gyorgyi. Bioenergy. M. 1960)».