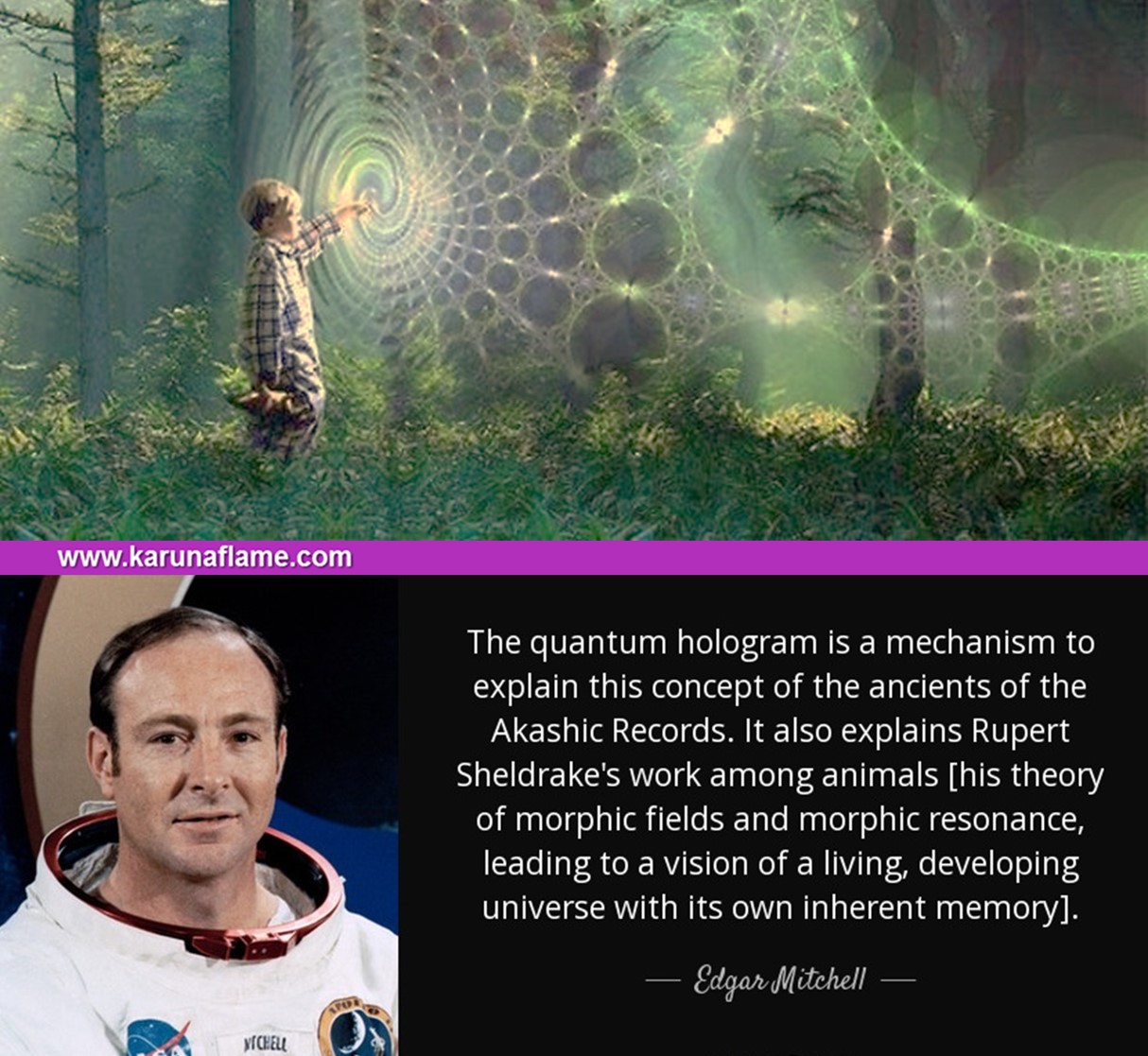 Our world is on the brink of making a massive transformation from materialistic-based limited paradigm into the holistic-based perception. In that new world, science and spirituality are no longer seen as separate. The life itself is a bridge. Here & Now Is Where Timeless Spiritual Wisdom & Science Meet

Quantum Physics And The ‘God Particle’

Quantum Entanglement (QE) or the ‘God Effect’ is the working mechanism of the Higgs Boson also known by scientists as the ‘God Particle’, because it’s so fundamental. Quantum Entanglement is at the heart of understanding how significant events across the universe operate at the macro- and micro- level in split-second synchronicity despite considerable distance between them. Quantum Entanglement suggests that information is exchanged faster between Quantum Entangled particles than the speed of light, which was deemed impossible per Einstein’s special theory of relativity proposed in 1905.

It did take a long time to prove that Quantum Entanglement truly existed. It wasn’t until the 1980s that it was clearly demonstrated. But it has been shown without doubt that this is the case. In 1982, at the university of Paris, a research team led by physicist Alain Aspect performed what may turn out to be one of the most important experiments of the 20th century. Aspect and his team discovered that under certain circumstances subatomic particles such as electrons are able to instantaneously communicate with each other regardless of the distance separating them. The problem with this discovery is that it violates Einstein’s long-held tenet that no communication can travel faster than the speed of light.

In the early 1930s, Einstein had problems with the whole of quantum physics, which is ironic given that it was partially based on his Nobel Prize winning paper on the photoelectric effect. What he didn’t like was the way quantum particles don’t have fixed values for their properties until they are observed. Why? Einstein couldn’t relate to a universe where probability ruled! That’s why he famously said that “Der Herrgott würfelt nicht!” or “The Lord doesn’t play dice!”

Einstein believed that underneath these mathematical probabilities were fixed hidden realities that we just couldn’t see. That was why he, Podolsky and Rosen dreamed up the idea of what we now call “Quantum Entanglement” in 1935. It was to show that either quantum theory was incomplete, because it said there was no hidden information, or it was possible to instantly influence something at a distance. As that seemed incredible, he thought it showed that quantum theory was incorrect the way it had been presented with probabilistic mathematics. Quantum entanglement is at the heart of the Einstein-Podolsky-Rosen (EPR) Paradox developed in 1935.

Since travelling faster than the speed of light is tantamount to breaking the time barrier, this daunting prospect has caused some physicists to try to come up with elaborate ways to explain away Alain Aspect’s findings. It has also inspired others to offer even more radical explanations including that of the holographic universe! The implications of a holographic universe are truly mind boggling… Aspect’s findings imply that objective reality does not exist, that despite its apparent solidity the universe is at heart a phantasm, a gigantic and splendidly detailed hologram. To understand why a number of physicists including David Bohm made this startling assertion, one must first understand a little about holograms.

A hologram is a three-dimensional photograph made with the aid of a laser. To make a hologram, the object to be photographed is first bathed in the light of a laser beam. Then a second laser beam is bounced off the reflected light of the first and the resulting interference pattern — the area where the two laser beams superimpose — is captured on film. When the film is developed, it looks like a meaningless swirl of light and dark lines. But as soon as the developed film is illuminated by another laser beam, a three-dimensional image of the original object appears!

The three-dimensionality of such images is not the only remarkable characteristic of holograms. If a hologram of a rose is cut in half and then illuminated by a laser, each half is still found to contain the entire image of the rose. Indeed, even if the halves are divided again, each snippet of film is always found to contain a smaller but intact version of the original image. Unlike normal photographs, every part of a hologram contains all the information possessed by the whole!

Whole In Every Part

The “whole in every part” nature of a hologram provides us with an entirely new way of understanding organization and order. For most of its history, Western science has laboured under the bias that the best way to understand a physical phenomenon, whether a frog or an atom, is to dissect it and study its respective parts. A hologram teaches us that some things in the universe may not lend themselves to this approach. If we try to take apart some thing constructed holographically, we will not get the pieces of which it is made, we will only get smaller wholes.

Extensions of The Same Source

Bohm believed the reason subatomic particles are able to remain in contact with one another regardless of the distance separating them is not because they are sending some sort of mysterious signal back and forth, but because their separateness is an illusion. Bohm suggested that at some deeper level of reality such particles are not individual entities, but are actually extensions of the same fundamental something!

Beyond Duality Into Wholeness

Quantum Entanglement seems to throw out the whole notion of cause and effect, as we know it! It is possible for a particle to interact with another particle in such a way that the quantum states of the two particles form a single entangled state. The definition of an entangled state is that it is not entirely independent of the other’s state. Its state is dependent on another’s state in some way. Given this dependency, it is a mistake to consider either state in isolation from the other. Rather we should combine the states and treat the result as a single, entangled state.

We are beginning to see the entire universe as a holographically interlinked network of energy and information, organically whole. As Einstein said, “Raffiniert ist der Herrgott, aber boshaft ist er nicht!” or “The Lord is subtle, but he is not malicious!” And as the mystic Maulana Rumi wrote around 800 years ago, “If you could get rid of yourself (ego) just once, the secret of secrets would open to you. The face of the unknown, hidden beyond the universe would appear on the mirror of your perception!”

Quantum Hologram Is Your Life And Your Body

Your Quantum Hologram is your ‘blue-print’, your ‘spiritual DNA’ or ‘Memory Bank’; it is a record of who you are now, who you were in the past in childhood, your ancestry and beyond into past lives; it also holds the knowledge of your potential future.  It contains your credentials, It’s your attitudes, thoughts, emotions and beliefs; your Quantum hologram holds all your experiences past and present; your loves, likes, and fears; it shows whether you are open to healing, and if not, what the emotional block is.

Information enters our Quantum Hologram in many different ways and from many different sources. One of the most powerful influences on our Quantum Hologram is our emotions. For good or bad, our emotions are ever-present influences and cannot be ignored. Happy, Sad, or painful emotional experiences register in our holographic field. Whether the current vibrational pattern in our holographic field is a healthy pattern or an unhealthy one, that pattern echos throughout our holographic field, through the crystallineLight Body, through the auric field, chakra centers, and into our physical body where it registers and manifests as either physical well-being or dis-harmony, ill-health and dis-ease.

The human body is controlled by a ‘network of  intelligence’ grounded in quantum reality.”

What The Bleep Do We Know – Trailer

TEDx Brussels 2010 – Stuart Hameroff – Do we have a quantum Soul?